Franzisca Siegrist’s performance was held in Norway at the gallery ROM for kunst og arkitektur, without audience. In this action the artist creates sculptural forms with her body, abstracted in relation to other elements and objects. She uses a specific wardrobe to create optical illusions, together with complex body postures. Sculptural Abstractions delves into the concept of belonging in its broadest perspective, and looks at the fragmentation of the body as a metaphor.

It is a great honor for us to present the great artist Franzisca Siegrist at the Ana Lama Gallery project. Her work has a vast media impact. From the onset, we would like to warn you that there might be blind spots in her work.

The Czech media are looking for a woman who entered people’s homes at night and watched them while they slept, and it is not clear whether or not the intruder had their consent. It seems that the interloper placed bets with these same people in nightclubs: she would know more than they did; she would know their innermost dreams.

The case sparked a wave of nervousness across the country, and a search and investigation to find out the identity of the Jane Doe, with more questions than certainties. Numerous cases were reported after video surveillance camera footage was analyzed.

“The images from home security cameras make it clear that the intruder does not mind the presence of people,” said the Prague media spokesman in a statement issued on Thursday. The same communication goes on to say, “We can say that she literally seeks out these houses.”

So far, seven such cases have been recorded by the media, but it is said that there may be many more.

By the same token, we do not know whether or not the intruder spoke to the people while they were asleep, but it is hard for us to understand how the observation of someone sleeping, in itself, reports back to the question of knowing their dreams. In our view, several issues are present here that can work together – abuse of trust, since you enter the house of someone you hardly know; and, on the other hand, an attitude that may be aesthetic or poetic, in the sense that you contemplate people with whom you are not intimate and this contemplation occurs in a serene way, while they sleep.  We may also experience constraints of this kind, while looking at paintings, like when we examine portraits that convey excessive intimacy.

For the most part, we are not in a position to interpret another’s dream, unless the person is communicating unconscious thoughts to us that have content behind them. The application of a practical dream interpretation method is therefore quite restricted. As a general rule, each person assumes the freedom to construct his or her dream world according to his or her individual peculiarities, thereby making it unintelligible to others. It seems to us, however, that – in complete contrast to what has already been said here – there are a number of dreams, which almost everyone has dreamed and which are supposed to have the same meaning.

“In one case, the suspect was sitting next to the bed of the family dog, without the domestic animal noticing.” Some homeowners also found the bettor’s conviction in conversation at the bar the day before the day of the raid strange, since she wanted to pay in advance, assuring them that she would lose the bet of knowing what their deepest dreams would be.

In another statement, given based on the footage, it is said, “In order not to be disturbed, she locked herself in her room, or on that floor, and sat as if in meditation in front of the bet victim’s bed, and then, after a while, left the house.”

The bettor who broke into homes in Prague (it is not known whether with consent or not) is between 20 and 40 years old and spent more than five thousand euros on bets centered on the theme of dreams. The woman is suspected to be the artist we have introduced – Franzisca Siegrist.

The concept of betting is, perhaps, a bit of a scheme devised by the author to validate the existence of consent.

Franzisca Siegrist was born in Switzerland and grew up in the Canary Islands. She currently works between the Canary Islands and Oslo. Siegrist works with objects, installations and performances, and looks to everyday life for inspiration to understand contemporary society.  She is also the organizer of the PAO-Performance Art Oslo project.

Siegrist deals with visual abstraction in the form of performances that record the encounter of the body with the object, an encounter that produces a new imaginary, and each of the elements no longer reports to what it was, but rather is transformed. She says that this is a way of thinking about images, to inscribe them in a register in which they go from being things outside man to becoming a thinking process; and performance is a thinking process.

The artist is of the opinion that with the figurative or literal you only get a single message, but if you take away the merely figurative in the process of composing images, you get an essence and stimulate the birth of new ideas.

Franzisca uses everyday objects in her plastic work, also inspired by the Fluxus movement, in which artists worked with what they had at hand and transformed the traditional use of these materials (it is assumed that there are not always budgets to make physical works and that, in this sense, performance, by virtue of its simplicity, opens up multiple opportunities).

She says that, with no materials or tools, she has learned to make works of art with nothing. Her ideas come from what she has at home, but in recent times she has combined this commitment to art povera with constructed and composed objects.

The wooden boxes she has created are an example of this, being manufactured objects that she then combines with plants and vases, playing between the frivolous action, inside a house, in the creation of static decorative objects and the remaking of a thought in action on those same aesthetic elements.

She tells us, that she is not at all a garden-decorating performer.

Everything is more complex than it seems. Moreover, even in science, new theories arise constantly, that destroy the stability of truth. In this world of uncertainty, we may think that the dichotomy between truth and lies is ridiculous; that, at bottom, the idea that if the stability of truth does not exist, and if what exists is rather a complete instability of truth and an extreme fiction, this would also be another problem… since it would become impossible to give full correspondence to this world, since this would imply superhuman qualities, so that we would have to overcome the panic of the absence of a moral direction within us.

On the other hand, radicalism – because it is also a radicalism to think that we only exist with dignity in the stability of truth (as human experience), in an ethic, that is, in a collective correspondence of the conditions of that truth with the common environment and the interest of all. In this case, freedom would have to bend – and we are talking about art – and it would only happen through a collective voice and a cause of common interest.

Perhaps this point of view is also radical, since it raises the question: how is it possible that, the voice of several or of the unconscious, can be conflicting with one of its parts?

Does it make sense that these unconscious conflicts combined with reason itself, common reason (something within the social sciences), when the unconscious which is apparently in opposition to reason – can also be a motor for a new justice?

In conclusion: on the level of ideas, truth, in art, is always a radicalism and an uneasiness, because when we make life choices that have to do with art, with being artists, with being teachers, with working in art schools, with being a spectator, we are stimulated daily to take extreme positions, saying sometimes that artistic freedom is just a false thing and that it is a tool at the service of social science (for example), and, in other times, that artistic freedom is the only true thing and the only way to scrutinize reality.

We think it is this awareness of the place of art as an unstable thing, as a radical thing, that led Franzisca Siegrist to be talked about by the media in the Czech Republic.

The questions raised by her observing people while dreaming, aligns with her attitude of experimenting with these limits and functions of art. “Does art have to be only in galleries, asleep in its functions, or can and, on the other hand, should it enter people’s homes and imagine, for example, what their dreams are?”, Franzisca inquires.

Regarding the process “The Collective Dreaming”, Franzisca says:

(She has not yet been confirmed as an author and, supposedly, an observer of people dreaming inside their own homes, with or without consent)

“I don’t think it was a conscious development. It just came out of the collective imagination and the tastes of the people involved. We wanted to do something different and interesting, because all the other visual artists were standing there like a bunch of idiots, and at the time the idea of performance had been replaced by others, absurd, self-indulgent and just plain stupid in their sincerity, authenticity and humorless masculine posturing. Punk had turned to some kind of orthodoxy, which was disgusting and alienating. We wanted to do what we liked to do and promote the things we liked to do, weird cosmogonies, politics of people not known, second-rate movies, tending the garden, growing mushrooms, taking the dogs of older neighbors out; that sort of thing.”

We should rather be describing the performance “Sculptural Abstractions #10”, made in the context of Ana Lama Gallery, which took place in Norway in the gallery space ROM for kunst og arkitektur, but we have chosen to describe the project “The Collective Dreaming” and the Czech media narrative about the dream watcher.

Talking about the possibility of Franzisca Siegrist being the trigger of this media affair serves as an example of the utopian function present in her work. 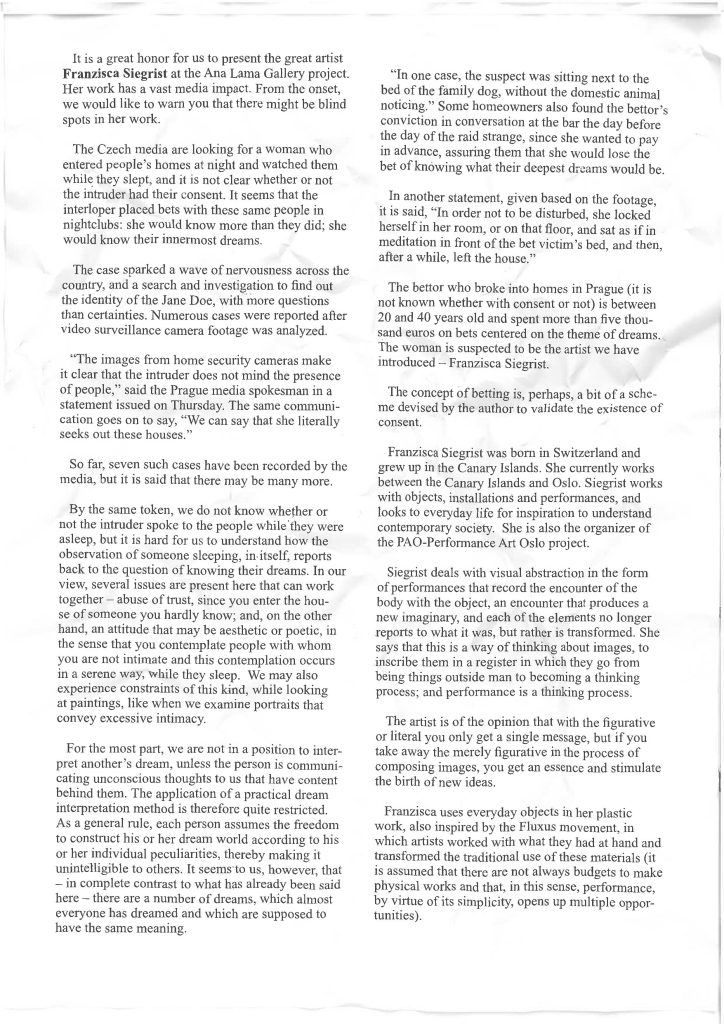 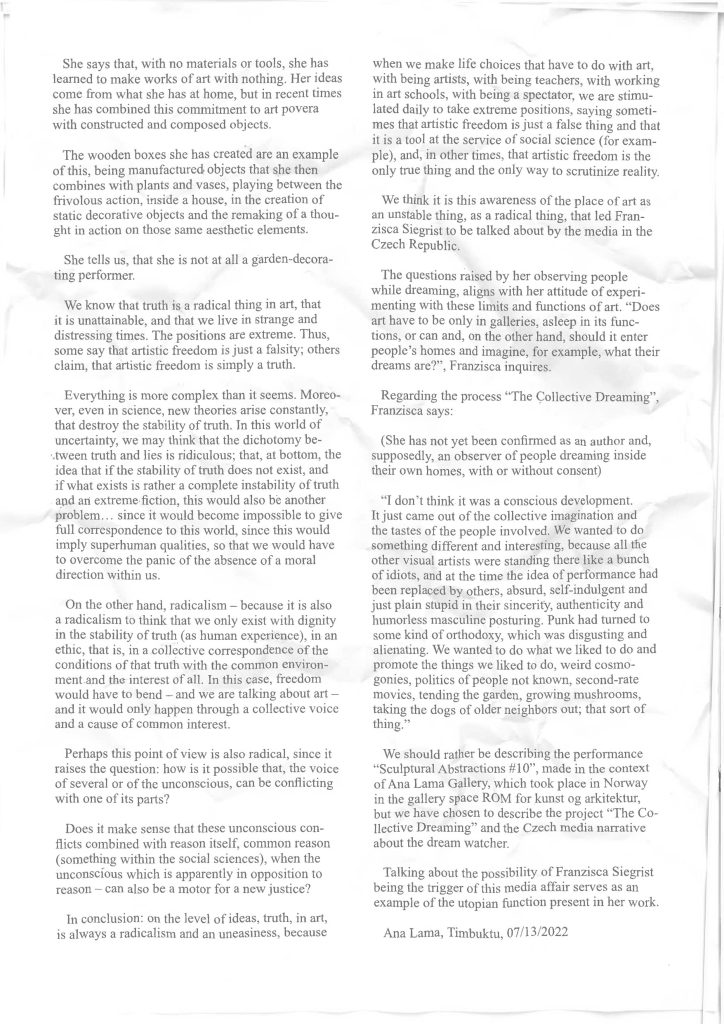 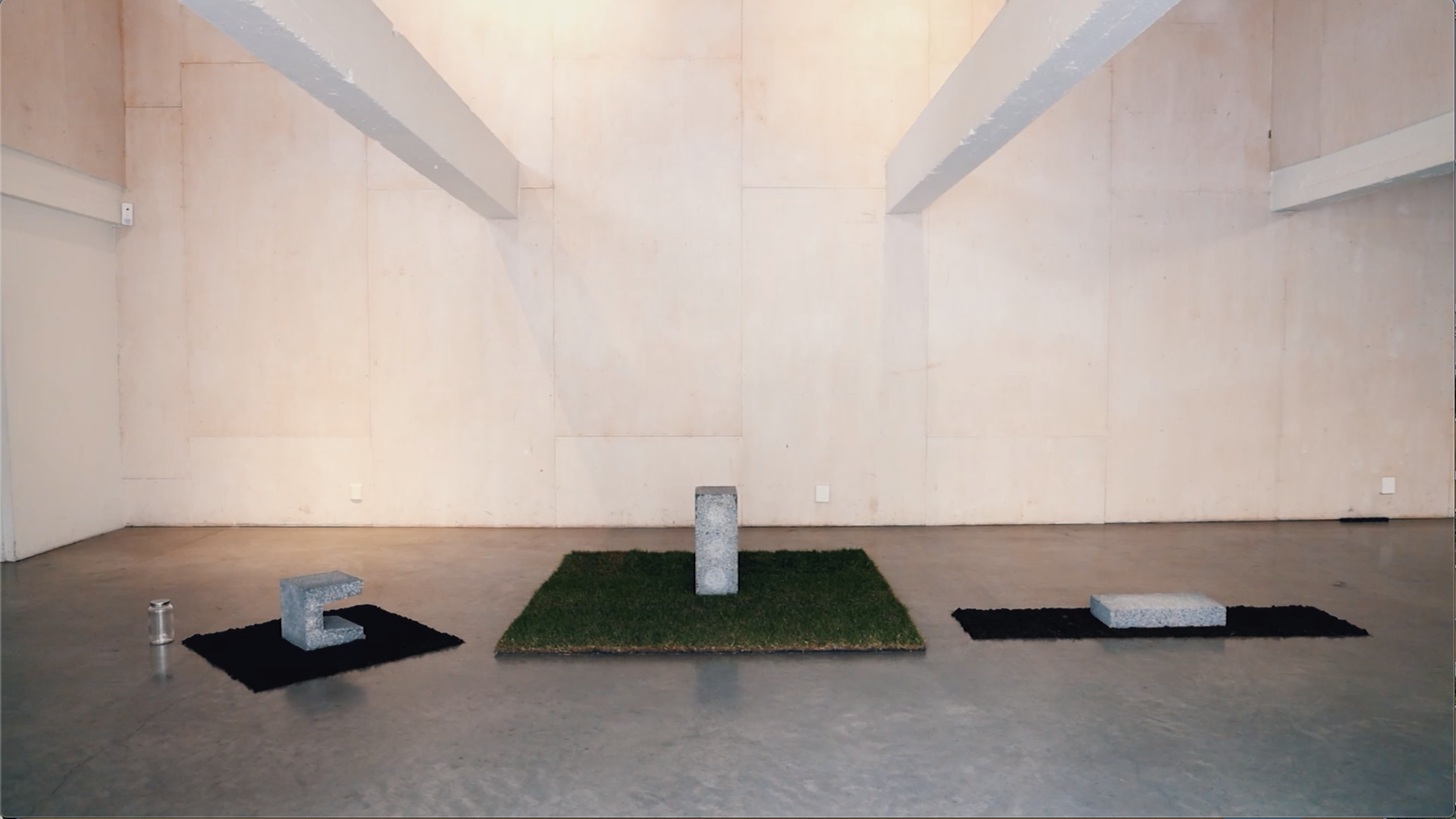 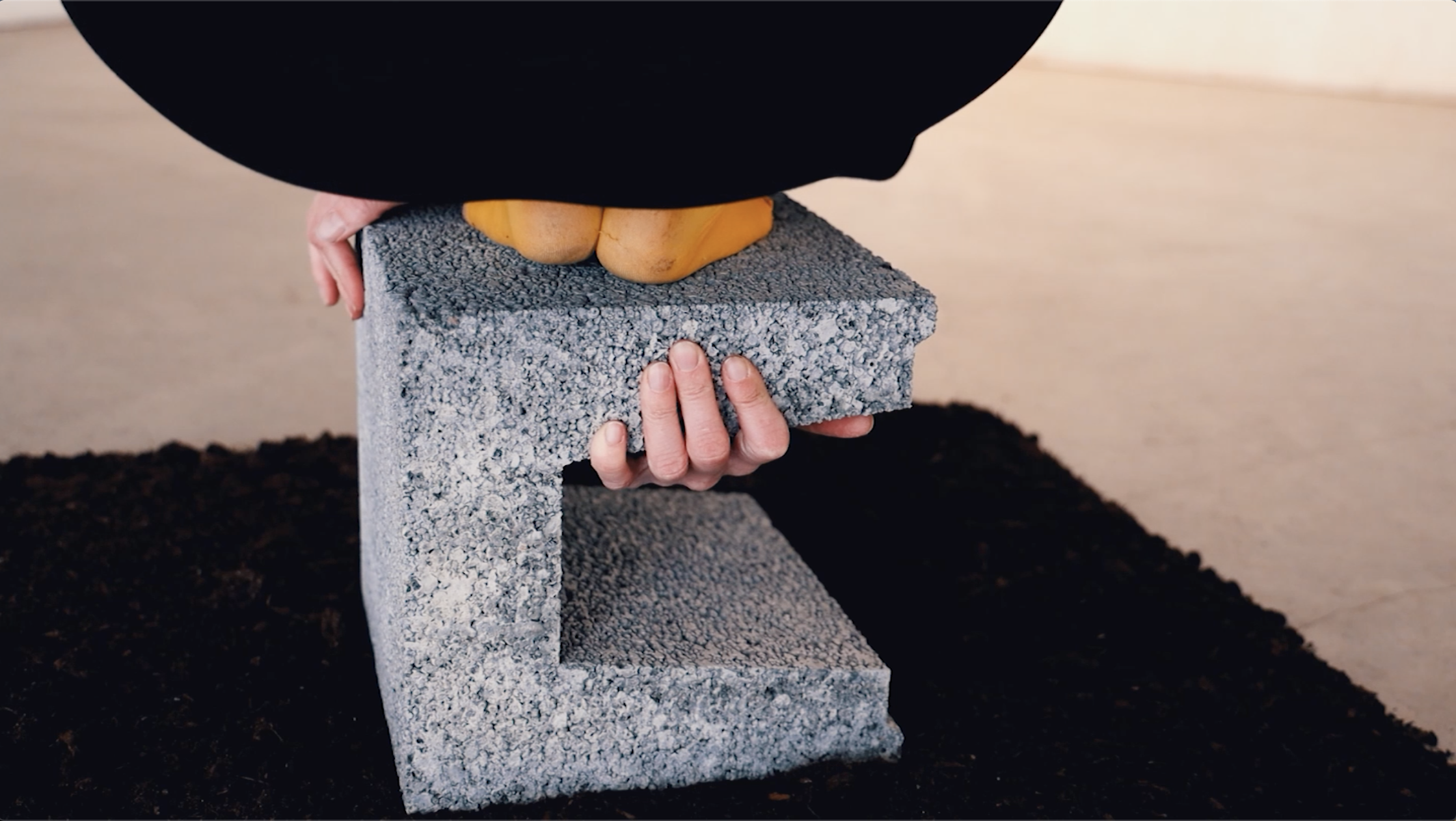 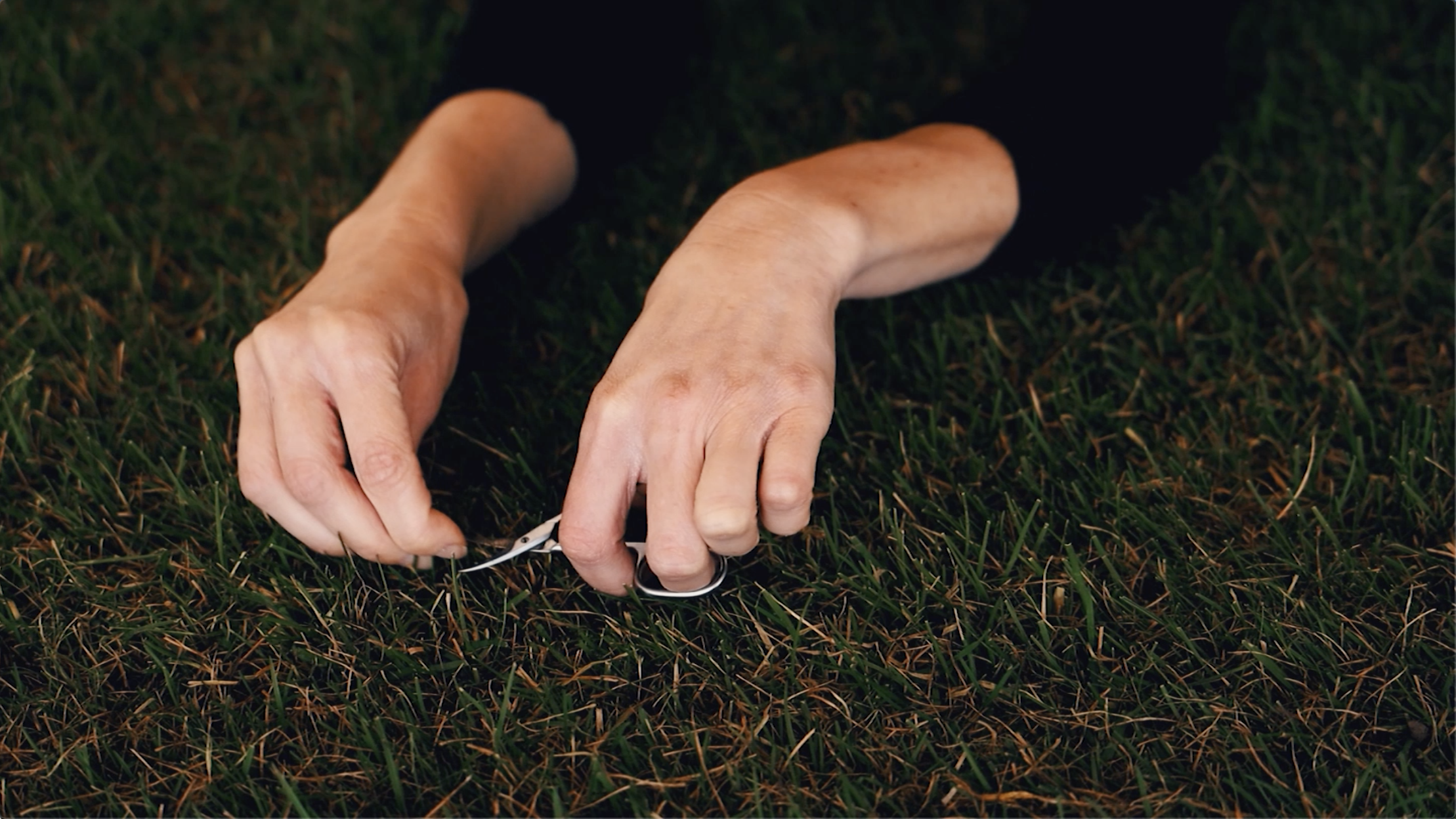 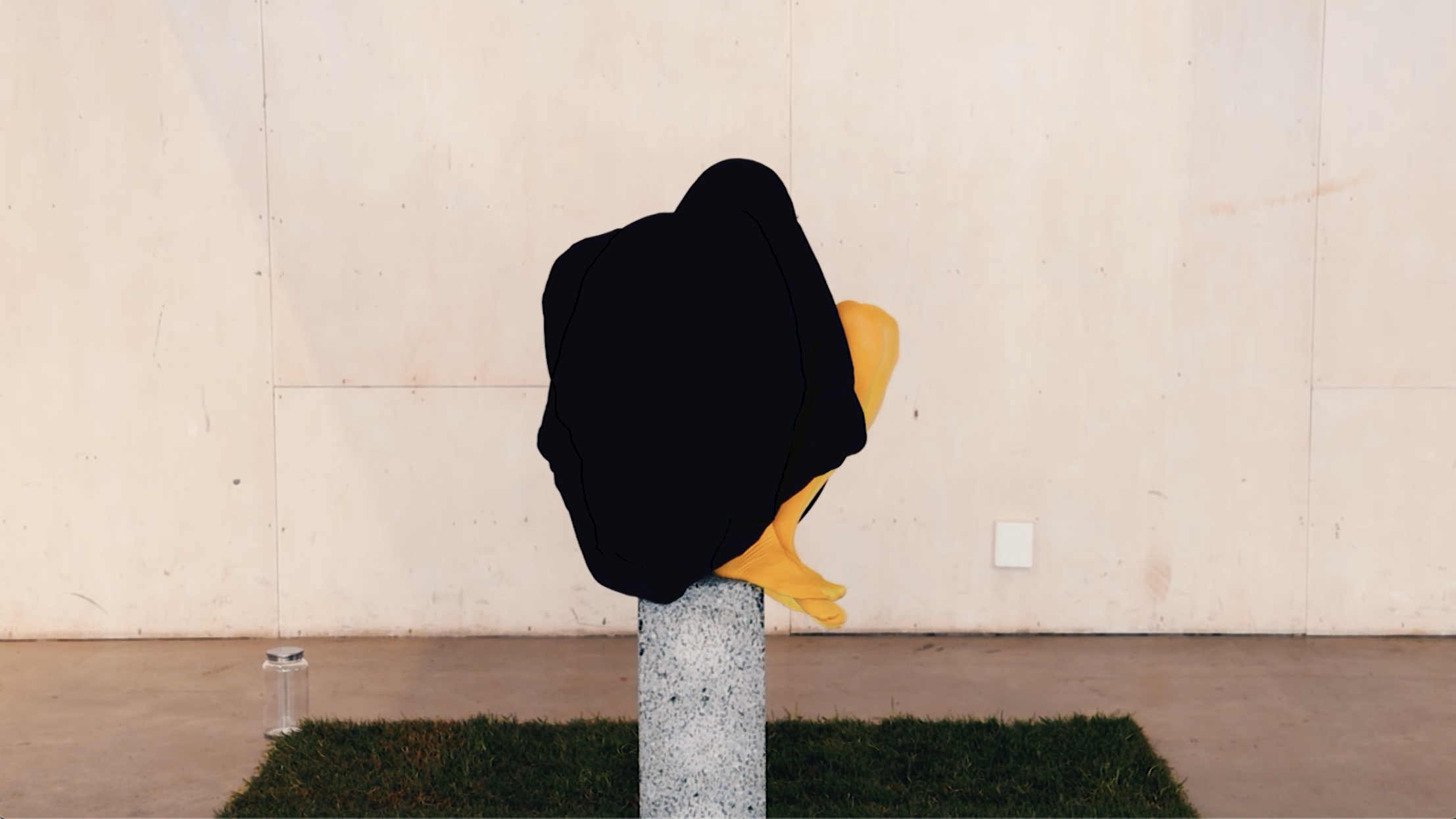 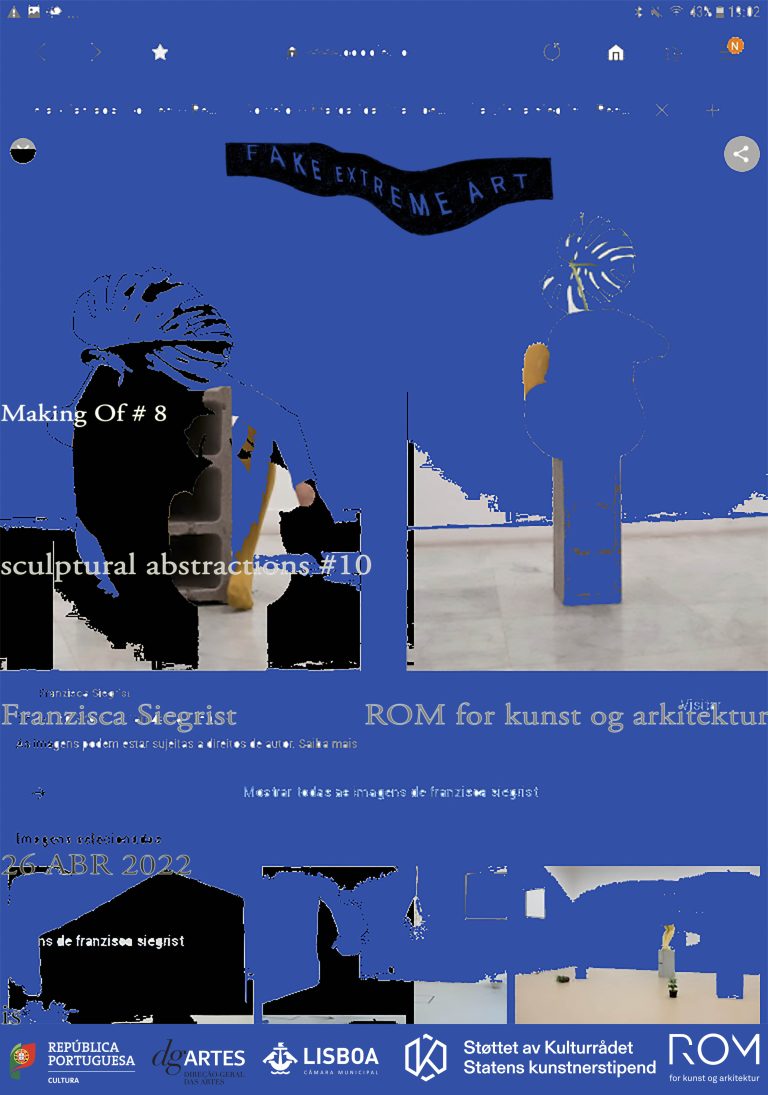